FDR’s famous quote is apt for our times, as we, too, are living in fearful times.  Recent events in our country’s life have put us on a path that will result in much destruction at every level of our personal and collective lives.  In speaking to various Republicans in recent days it is clear that many of us are terrified.  Without underestimating the seriousness of the situation fear and terror are lousy foundation stones on which to build a future anybody sane would want.

Of necessity our decisions about the future are predicated on what we believe about the present.  Henry Ford expressed this idea concisely when he said, “Whether you believe you can or you believe you can’t, you’re right.”  Regardless of exterior circumstances the most powerful influence in the human decision making process, whether at the individual or collective level, is belief in the power to influence events.  The greatest single impediment to influencing the future is fear.

“Fear is the mind killer,” says Frank Herbert in his science fiction novel Dune.  Fear limits our awareness of our choices, stifles hope and strews obstacles on the path to achievement.  Fear diminishes us and stunts the future of our world.  Fear dims vision, cramps hope, is the antithesis of faith, dispels peace, banishes love and cramps joy.  That is no way to live.

The Good Book says, “Be not afraid” in one form or another 365 times.  I will suggest that this is no coincidence.  I will further suggest that even if you don’t accept the provenance of the Bible, these words are true and a clear guide to a happy life.  Imperfect people such as your Irascible Correspondent cannot live totally free of fear, nor should we, but we can live lives of greater hope, greater faith and greater love.

We can live courageously. Courage is not the absence of fear, courage is acting purposefully despite the fear.  The absence of fear, either because the danger is minimal or non existent, or because the danger is minimized. or ignored is outside the bounds of courage.  Brushing my teeth in the morning is not an act of courage, neither is jogging down the middle of the 405 at midnight.  The former act is perfectly safe, the latter is insane foolhardiness.  Courage is one among the seven virtues, and is tempered by prudence and temperance.

When considering how to speak, act and live honestly and freely when evil men seize political power requires us to attend more carefully to the cultivation of virtue, whether the traditional Christian or Stoic virtues.  Practicing the virtues is critical because they promote human excellence in the face of evil, which delights in the destruction of all human good. 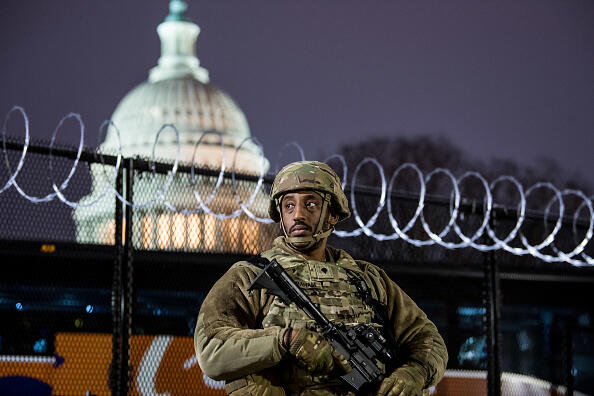 As I survey the situation it is clear that the plotters that the Democrats and the Left are terrified.  They have surrounded the Capital with a wall, guarded it with thousands of soldiers, plan to implement election rules to guarantee that they can never lose another election, silence all opposition on social media, the mainstream media shouts constantly the lies they need us to believe, have made it a crime to contradict those lies, continue to demonize President Trump despite him being out office and have begun arresting opposition figures.

In his book “On Killing,” Lt. Col. Dave Grossman points out that among members of the same species there are more options that simply Fight or Flight, there are also Posture (attempt to dominate) and Submission.  All this is the Donks are doing to persuade us to submit and surrender.  They do this because they know that if were were fully alert, aware and aroused they wouldn’t stand a chance.

They keep thinking that free Americans are going to rise up and do to them what they are trying to do to us: strip them of power by means of violence, then hold them accountable for their actions.  Yes, we want to strip them of power, but we want to do it peacefully and legally.  These people always give themselves away because they must project their wicked plans on their foes.  As the Psalmist says, “The wicked flee when none pursue.”

I doubt very much that the American people will rise up until we can no longer feed our kids.  That has been the historical norm, anyway.  Meanwhile they continue to fortify that seething hive of scum and villainy, at the same time they want to make us helpless.

They are bullies.  They will push us around so long as we let them.  Once we stand up to them they will collapse.  Look them in the eyes boldly and know for certain that all they have is force.  It is we who have the power.  They can only take that from us if we cede it to them.  Don’t cede that power which is our God given birthright.