The Texas town of Uvalde, Texas, the birthplace of President Harry Truman, lies about halfway between Eagle Pass and San Antonio. Your Irascible Correspondent has been through the town many times, going to orthodontist appointments in San Antonio. Mesquite everywhere, once in a while a javelina pig scrambling to get out of the way of our onrushing station wagon, but mostly hot. A hot day in Los Angeles is a mildly warm day in South Texas. Every year there are news stories about frying eggs on the sidewalk.

Things have changed around those parts. Once sleepy Uvalde is now bedeviled by the criminal gangs trafficking drugs and people from south of the Rio Grande, fighting it out over turf and pelf. This irregular warfare swirls all over the southern borderlands of El Norte, aimed mostly at rivals, but inevitably the natives get swept up in the chaos, are plundered, are recruited or cowed to silence – or worse.

Even before Texas became a battleground for legions of foreign mercenaries the battlefront of the culture wars was already at work. Salvador Ramos, the cast off of a failed marriage, raised in poverty by his grandmother; his mother was an addict and his father was just plain gone. There seems to be evidence that he was flirting with the transgender movement (the pictures seem to have been scrubbed from search engines) and that he was under the care of a psychiatrist. Was he receiving SSRIs (a psychotropic medication known to turn a small minority of young men into rage monsters – see here and here)? I’d be interested to know.

His online communications shortly before the shootings clearly indicate that this was something he planned and prepared for. But how did he afford to make those preparations? From the Gateway Pundit:

How did an 18-year-old man, with no known employment, who was living with his grandmother because of an addicted mother, afford: 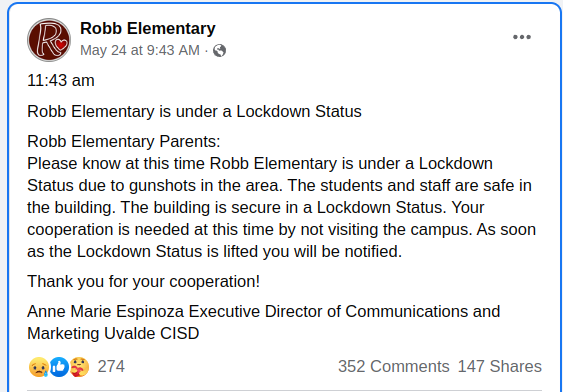 Uvalde has become a rough neighborhood. So when shots were heard in the vicinity of Robb Elementary School the school went into a well practiced lockdown routine. The Gateway Pundit lays out the timeline of events following:

Now, the timeline…this we know. Well, at least we’ve been told. Initial reports yesterday from Texas DPS spokesman Victor Escalon stated that Salvador Ramos shot his grandmother, DM’ed some friends about it on Facebook telling them he was going to now shoot up a school, and then drove to Robb Elementary in Uvalde, TX. At 11:28 am he crashed his truck into a large drainage ditch. It appears as though he drove into the ditch by crashing the gate that was securing it, smashing up the front of the truck and snapping the axles on the front left and rear left of the truck.

According to Escalon’s presser, this commotion caused two men from the funeral home to come outside and approach the truck. Ramos shot at the two men and they quickly fled, uninjured. The map below shows the funeral home, Robb Elementary, where the truck crashed (red circle) and the unobstructed view out of the windows of the school (large arrow). It also shows the area of the doorway where Ramos allegedly entered the building (small red arrow).

Now is where things get confusing. Yesterday, Victor Escalon told us that at “11:40, he walks into the west side of Robb Elementary. According to reports, video we have obtained from outside, inside, and again, we’re still combing through that…so bear with us…multiple rounds, numerous rounds are discharged in the school…four minutes later (11:44), local police departments…are inside making entry.”

This would imply that there was approximately 12 minutes between the crash and initial shots, and Ramos’s ultimate entry into the school. According to Escalon, this is confirmed by video. I would imagine that, in his notes for the press conference, he had the times from the video written down and referenced those. He was descriptive enough to tell us what he did inside the building: “At 11:40, he walks approximately 20ft…30ft…he walks into the hallway, he makes a right, walks another 20ft. Turns left into a school room. Into a classroom…that has doors that open in the middle.”

Now again: that time is important. That is now twice Escalon has referenced that time, 11:40, as the time he entered and said it came from video evidence that they have.

HIS TIMELINE IS AS FOLLOWS:

11:27: One minute before Ramos crashes his truck, a teacher props open the door which Ramos eventually uses to enter the school. This door is reportedly normally *locked*.

11:28: Ramos crashes into the ditch. The teacher runs to room 132 to retrieve a phone. The same teacher walks back to the exit door and the door remains propped open.

(No time given): Ramos opens the truck and two men from the funeral home, who were checking on him, take off running when they see a gun. They’re shot at but no one is hit.

11:30: The teacher runs back inside, panicked, and apparently calls 911. Door remains propped open. The use of the word “apparently” is peculiar. At this point in the investigation, with this detailed of a timeline, you would think that teacher has been identified, confirmed and a statement taken, that they did in fact call 911.

11:31: Suspect shoots AT school (not from inside the school) while patrol vehicles get to the funeral home just 100-250ft away from the school opening.

It is at this point that McGraw reiterates Escalon’s point that there was no UCISD officer (Uvalde Co Independent School District) on scene or on campus, but that the officer (who was normally on campus?) sped back to where he thought the shooter would be, which turned out to be a teacher. In doing so, he drove right by the suspect, who was hunkered down behind a vehicle. Ramos then began shooting at the school.

11:33: Suspect enters the school. Note: law enforcement is *reportedly* at the funeral home 100-200ft from the entrance Ramos used. In the two minutes that reportedly elapsed, no one was able to pinpoint his location and engage? Had the door been properly closed and locked, Ramos would not have gained entry to the school, at least not as easily as he did.

11:35: Three police officers (Uvalde PD) enter the same door Ramos used . Then another team of 3 UPD officers and a Uvalde Sheriff deputy enter. Two of the first three officers received grazing wounds from the suspect while the door was closed.

12:03: Officers continue to arrive. As many as 19 officers are now in the hallway outside the classroom.

11:50 (12:50?): They breach the door using keys from janitor “because both doors were locked when officers arrived.” Suspect is killed.

Both of these timelines, comparatively, are very confusing and somewhat contradictory of each other. How is it that two full days after the event, the timestamps from the videos used for yesterday’s press conference were not accurately portrayed to the press, but distances and other relevant details were? There is already enough pressure and outrage over the fact that it took almost an hour and a half from the wreck to the suspect’s demise, the majority of that with Ramos INSIDE the classroom. Such reporting inaccuracies from DPS is ridiculous and leads to lack of faith and transparency in reporting.

Shimon Prokupecz of CNN put it best when he asked Escalon yesterday: “What were the officers doing between 11:44 and 12:44?…We’ve been given a lot of bad information…so why don’t you clear all of this up now and explain to us how your officers were in there for an hour, yes rescuing people, but no one was able to get inside that room?”

Here’s what they were doing while kids inside the school were calling 911. This is strong stuff, but you NEED to see it.

One mother took matters into her own hands:

According to a report from The Wall Street Journal, one mother was placed in handcuffs and a father was tasered for trying to retrieve their children.

“Ms. Gomez, a farm supervisor, said that she was one of numerous parents who began encouraging — first politely, and then with more urgency — police and other law enforcement to enter the school. After a few minutes, she said, federal marshals approached her and put her in handcuffs, telling her she was being arrested for intervening in an active investigation,” The Wall Street Journal reported.

“Once freed, Gomez moved away from the crowd, broke into a run, jumped a fence and ran inside to rescue her children. “She sprinted out of the school with them,”” The Journal reported.

That is how it needs to be done. This is Texas, probably half the people there had guns in their vehicles, yet it was up to a group of Border Patrol agents to take action and end the madness. Even so it took them almost an hour of being held at bay by the police before they made a plan and executed it. Everybody’s calling them heroes, your Irascible Correspondent calls then second rate heroes, they waited far too long.

There are questions galore, and no satisfactory answers from the authorities. It is interesting to note that as we approach the November elections we suddenly have a spate of mass shootings which has inevitably set the gun control hounds to frantically barking. It feels to me as if this is one last grasp at the “lets disarm the people” straws. It would be good for them if the if private gun ownership could be banned before the results of the 2022 midterms are announced. Almost as if they know that they won’t be able to pull of a sufficiently massive election fraud sleight of hand to retain power and this is the last cast of the dice, double or nothing, winner take all.

I’ll let Jeffrey Prather have the last word. I believe his analysis is right on the money.