Several QAnon and far-right influencers have blamed sickness on an “anthrax attack” after the recent conservative ReAwaken America conference held in Texas from December 9 to 11.

The Dallas event, which is part of a longer tour across several states, featured guest speakers including former President Donald Trump adviser Michael Flynn, MyPillow CEO Mike Lindell, and the far-right conspiracy theorist Alex Jones, according to an itinerary for the conference.

There is no evidence to suggest that anthrax, a bacterial infection that has been used as a method of biological warfare, was present at the conference in Dallas. Symptoms of anthrax poisoning — including cough and shortness of breath — are similar to those associated with COVID-19, the US Centers for Disease Control (CDC) says.

All right, boys and girls let’s take this apart.  Note that the first thing that happens is that the people involved are made to appear associated with the far left bogeyman “QAnon.”  In the first place QAnon is a misnomer.  There was an anonymous entity called Q that posted pro Trump, anti-leftist messages on the internet, there is no QAnon.  As a far left hit piece it fails for not having done decent research.  Further, although all the persons named, General Flynn, Mike Lindell and Alex Jones acknowledged the existence Q none associated themselves with the posts or support what the posts asserted.  Being aware of something does not make anyone an ally, associate or co-conspirator.

Secondly, anthrax is a bacterial pathogen, whereas Covid is a viral pathogen, and the diseases they each cause have very different symptoms.  They are similar in that they make you sick and can kill you if left untreated.  There the similarities end.  But you will notice that the illness that these people experienced is explained away as Covid with the implication that these conservative yokels are not only too dumb to get the experimental serum injection, but are too dumb to recognize the WuFlu when they do get it, and it is all their own fault.

There’s more, but I am pressed for time and I want to provide you with some info you are not likely to see anywhere else.  Jovan Hutton Pulitzer, who was present at the conference and got sick, made a recording of his observations.  It is behind a subscription paywall, but I will summarize here. 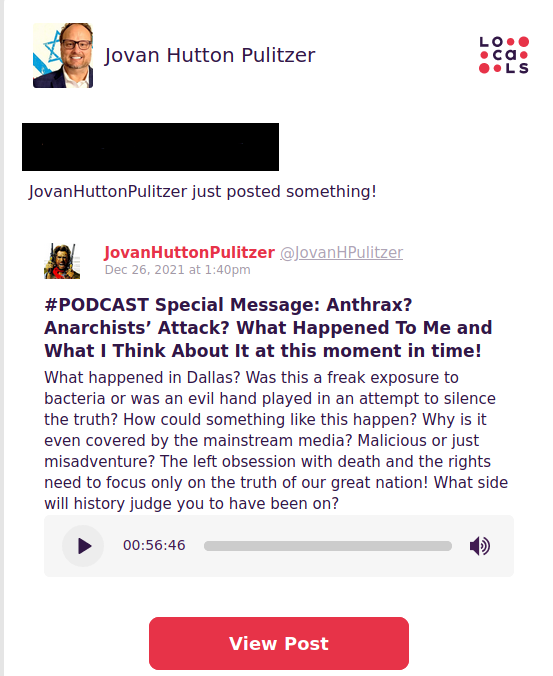 Pultzer was not a speaker at that event, but he knows and works with many of the people who were.  It was a good opportunity to meet with them, catch up and make plans.

In the speakers’ lounge there was a table with food.  At some point the table was replenished by two groups of food service people.  A man on the second team spritzed the food with a small aerosolizer and left.  Shortly after that team left he began sweating profusely.  He began “passing blood,” presumably while urinating.  His legs were in intense pain and could hardly walk.  The skin on his hands and legs began sloughing off.  He developed a rash on his arms and neck that turned into pustules which painfully burst.  He developed a high fever and was essentially delirious for several days.  Almost three weeks after the event he was still experiencing difficulty talking.  As of his report the doctors still don’t know that this was.

That ain’t Covid, Covid is a severe respiratory flu that attacks the lungs.

What is clear is that the Deep State and the Global Supremacists are growing more afraid and are feeling the need to take direct action to suppress the opposition.  This means that we are winning.  Keep the pressure on.  Resist boldly.  They only do this because they want to intimidate us into quitting.  Never give up, never surrender!