↓ Skip to Main Content
Home › Uncategorized › The horror unfolds, how to tell if a vaxx lot is bad
Tamquam Posted on November 9, 2021 Posted in Uncategorized No Comments

The horror unfolds, how to tell if a vaxx lot is bad 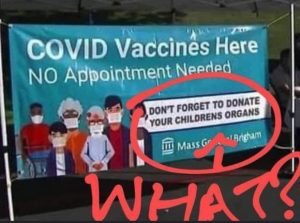 The more we find out about the Covid injections the worse it gets.  In the last 24 hours we have found out a couple of devastating facts.

We have known for a couple of months that the shots were known to be dangerous by the pharmaceutical companies manufacturing them well before they were made available to the public.  Now we have a better idea of how they passed the initial trials.

Vox Day passes on a report from an insider:

Last week I caught up with a friend who worked on some of the first Moderna vaccine human trials in the US. He revealed to me that it is indeed as bad as we thought it was. He had worked at a research center 6 years testing various drugs and was in charge of describing and filing reports for serious adverse reactions (SAEs). SAE’s include anything from getting hit by a bus to having an anaphylactic reaction to the drug at the center (basically any serious health event has to be recorded and investigated for any link to the clinical trial for the duration of the trial.) For a normal week, he’d have 1 or 2 SAEs to file and report. When they started the Moderna trial, within a week he was having to come in early and stay late to get through stacks of SAEs.

The normal acceptable threshold for SAEs is 5%. Once you cross that threshold, and more than 5% of your patients are reporting SAEs, you have to stop the trial and investigate for cause. Well, they had a rate of at least 16% after a few weeks. So, confused as to why the trial had not been flagged and halted, they looked into their SAE database and found that the majority of the ones they had reported to the agency responsible (I think FDA) were missing.
They called said agency and were told that there were a high volume of SAEs being reported from multiple centers, so they were going through and removing the “irrelevant ones.” They claimed that the state of the pandemic warranted an unconventional approach to research. Obviously this is insane, even to the trusting individuals my friend worked with so the head of his clinic called a conference of the other 20 or so sites in that region and they all were having the same experience. In other words, this wasn’t a fluke.

Things eventually got so bad that my friends’ boss told the company he was contracted with that he was going to discontinue the trial because people were having so many SAEs including seizures, clots, myocarditis, death, etc. The contracting company told him that he was obliged to finish the trial, from what I gather because the official number of SAEs was below the 5% threshold. Friend’s boss said “go take a hike, I quit.” Walked away from his head job at the research center where he made millions.

Data is being deleted right, left and center, that constitutes fraud and brings the whole thing under Article 1 of the Nuremberg Code:

Providing these injections is illegal, immoral, contrary to sound science, an absolute violation of medical ethics and a violation of the US Constitution.  They knew the harm these treatments were causing and they hid the evidence.

But knowing that if they simply rolled out the experimental genetic serum all across the board the number of resulting injuries would give their game away, not all, perhaps not even a majority of these injections contained the death juice.  As presented in these pages last week, “Somebody got busy and did an analysis of the CDC’s Vaccine Adverse Event Reporting System (VAERS) and turned up some interesting data.”  To wit, that some lots of the vaxx had higher adverse events than others, and that the lot numbers for these is now known.  You can now look up whether the shot received by yourself or anyone else was particularly poisonous.  Here’s how, from a Twitter thread by Hans G. Schantz: (click on each image to show the entire image)

Would you like to check on the lot of vaccine that may have injured a loved one? Or check out the track record for the lot about to be injected into you, before it's too late? The CDC makes it easy to do. This thread will walk you through the process. https://t.co/qGITgezfwK

1) Go to: https://t.co/DnHkhasFAl
2) Read the disclaimer and click "I agree" at the bottom of the page.
3) Click on "VAERS Data Search" pic.twitter.com/G0NRQilVNy

4) Scroll down to section 3. Enter in your vaccine lot number. For instance, a friend got ER8727 which left him sick for over a week. Click "Send" on one of the section divider bars. pic.twitter.com/3YSzx64Mpy

You'll get a report like this one. Pfizer vaccine lot ER8727 had 2291 reports… pic.twitter.com/F1g9kZnHzV

That was a bad lot – in the sense that it has a significant number of deaths associated with it. All of the reported deaths from the Pfizer vaccine come from just 5% of the lots. https://t.co/EsKILbayK7

And there's a similar wide divergence in lethality for lots of the Moderna vaccine as well. So please check out the track record for YOUR lot BEFORE you get shot.