↓ Skip to Main Content
Home › Uncategorized › How to bring down an adversarial political figure
Tamquam Posted on October 12, 2021 Posted in Uncategorized No Comments

How to bring down an adversarial political figure

Twelve years ago, following the vile treatment received by Sarah Palin at the hands of the Leftist media whores, Francis W. Porretto expressed his revulsion in a piece titled, “Vengeance For Sarah: How It’s Done” on his Eternity Road blog.  Alas, Mr. Porretto is no longer active on the internet to my knowledge, and may have passed to the the Great Beyond.  Unlike mere flesh and blood what appears on the internet (almost) never dies, so his blog and it’s contents are preserved in the internet’s online mausoleum, The Way Back Machine.

His observations and recommendations are as pertinent today as when Palin’s humiliation was still burning fresh.  Your Irascible Correspondent will now turn the Way Back Machine to Sunday, July 5, 2009; won’t you join me in a jaunt into the Great Over and Done With to hob-nob with Francis W. Porretto?

I’ve received a lot of email, since I posted this and this, that suggests that the libertarian-conservative Right couldn’t possibly do to the Left or the Republican Establishment what they’ve done to Sarah Palin. A few of my correspondents have suggested that it would be immoral, which indicates a lack of imagination. The majority have asked, in one way or another, “How?”

Here’s how: a simple, easy-to-follow algorithm for making room for good people and the ideas of freedom in American politics once more:

The key attributes of the above algorithm are:

An old joke runs that, if a computer programmer were sent to Africa to catch an elephant, he’d fly to Cairo, traverse the continent alternately east and west until he found an elephant, and then stop. (If he’s a real ace, he’ll pre-position an elephant at the Cape of Good Hope, to assure his algorithm’s orderly termination.) This might seem laughable to anyone outside the software trade — and to quite a few persons inside it — but there’s this about it: it would work. (Well, assuming the elephants aren’t allowed to move around, anyway.) So there’s your algorithm. You might come up with something more elegant or efficient on your own, but what I’ve set down above, if faithfully prosecuted, is guaranteed to make the typical corrupt, arrogant bastard of a statist politician wish he’d never been born.

Let’s get to work. 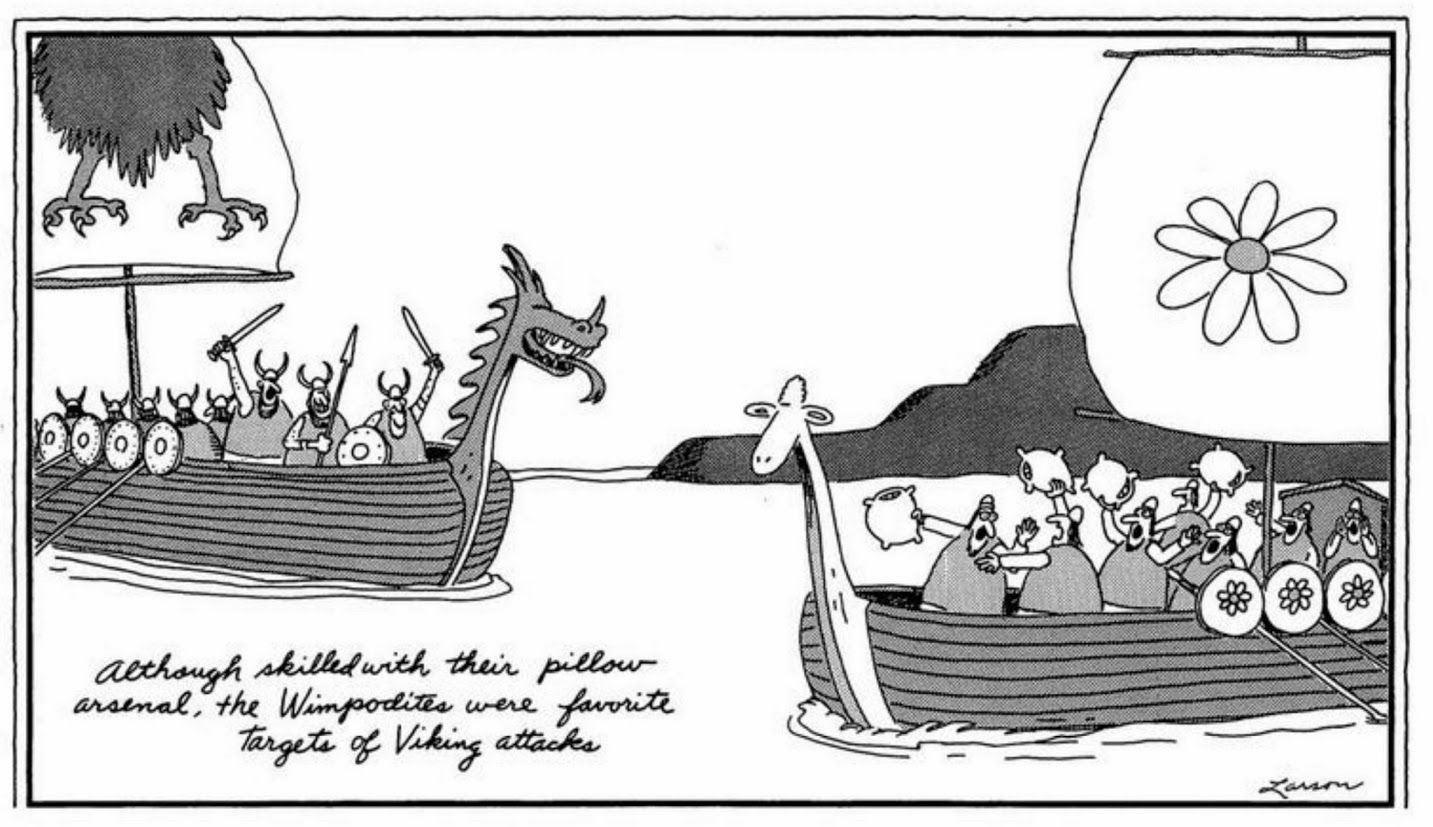 Mr. Porretto by his own account was the target of a great many complaints about his excellent suggestions.  It would be amusing to know how many outraged and impotent conservatives have changed their tune as a result of the last dozen year’s warfare.  But that is an imponderable.  What we can know is Mr. Porretto’s apologia pro argumentum suum.  So let’s gently nudge the Way Back Machine forward to Tuesday, July 7, 2009 and see what what the great man has to say.

Vengeance For Sarah: The Moral Rationale

Gentle Readers of Eternity Road can imagine how much hate mail, and how intense, I’ve received since I posted this recipe for retribution. Most of it is woefully unimaginative; the typical correspondent is an “F-bombardier” armed with nothing but stock insults, who has little else to say for himself. To those who wish to improve at the art of insult, take heed: scatology and obscenity only make you look crude. The best insult makes heavy use of the target’s own words and deeds, and develops from there.

But to the main point: several negative emails have come from self-nominated Christians, who’ve accused me of unChristian thinking and exhortation. As I said in the earlier piece, this indicates a lack of imagination. More, it suggests that the correspondent has failed to grasp several important principles of human relations. Perhaps it’s time to elucidate them.

This is one of the most important things Jesus said during His time on Earth. It’s also the most inaccurately applied.

How is Smith to know how Jones would like Smith to treat him? Is he to proceed solely from Jones’s words, or is there “a more reliable authority?”

I would go by Jones’s actions. An honest man’s words and deeds will run in concert. A dishonest man will lie with his lips but speak truth with his hands. When words and actions disagree, the better course is to trust the actions.

For some years, the actions of the Left have been entirely aggressive and venal. Leftists are uninterested in rational discourse; they want power and will do whatever it takes to get it. Since the opposed movement of the Right is founded on rational discourse, they silence us when they can and shout us down when they can’t. Since we’re taught to respect the established “rules of the game,” they seek to write the rules in a fashion that will predetermine our defeat. When that’s not possible, they position themselves as enforcers, but with a blind eye toward offenses by their own camp and an infinite readiness to assume the worst about ours. When one of ours becomes prominent, and starts to win the admiration of the body politic, their jackals swarm around him and nip at his flanks until loss of blood should bring him down.

That’s the way they treat us. Why not use the Golden Rule’s inferential power? Why not conclude that it’s how they’d like us to treat them?

Christians are not commanded to refrain from defending themselves or their own. Sometimes the only effective form of defense is counterattack — and in politics, more often than not. As for what Jesus would say, remember this one: “If anyone among you hath no sword, let him sell his cloak and buy one” — ? Christians are commanded to oppose evil with all appropriate weapons. Which leads us to the next of the aphorisms in my thoughts today.

If your French is a little rusty, that means “Shame on him who evil thinks.” It was embroidered onto the ceremonial garter worn by members of the Order of the Garter, a chivalric institution of England at the time of the Hundred Years’ War. You might call it the Inverse Golden Rule: the part Christ refrained from making explicit, because there was enough backbiting going on in Judea already.

How shall we know “who evil thinks?” Aren’t his words a reliable guide? People tend to project their attitudes and assumptions onto those around them, particularly in matters of moral character. Jones, who vilifies Smith at every opportunity, casting contemptuous imputations supported by nothing but speculation, is likely to be behaving in exactly that fashion: “I would do that / have done it myself.” Aren’t we entitled to assume that Jones must have something of his own to hide?

Plato noted in The Republic that an expert poisoner is the best guard against poisoning one can hire: he knows the tricks of the trade. His employer might have pardoned him for his earlier crimes, but the crimes remain embedded in his history. They constitute a permanent reason to suspect anything he might say about someone else’s deeds or proclivities.

In prosecuting the Vengeance for Sarah strategy, you must never indulge in an Emile Zola-like J’accuse! The critical consideration is what inferences the patterns in your target’s behavior suggest and will support. But never, ever state such an inference as a firm conclusion; merely pose questions.

Make the question mark your favorite item of punctuation! Does Jones repeatedly engage in real-estate transactions on undeveloped land that no one has ever seen? Has he made a great rearrangement of his finances since becoming an aspirant to public office? Is he routinely seen in the company of a particular woman other than his wife? What about all his tax-funded junkets to Dubai, Bali, and…Aruba? Does he evade questions about these matters? Could more be going on here than meets the eye?

Of course, it could all be innocent, merely suggestive without foundation. Which leads us to my next homily.

***
3. “If Your Hands Are Clean And Your Conscience Is Clear, You Have Nothing To Worry About.”

The above comes from one of Robert Ringer’s books, possibly How You Can Find Happiness During The Collapse Of Western Civilization. If our notional target Jones is truly innocent of wrongdoing, he won’t worry about suggestions that he’s transgressed. He’ll react to inquiries into his affairs with a carefree smile. He won’t resist investigators’ attempts to scrutinize his dealings. He certainly won’t question others’ motives for suspecting him; after all, he’s a good man, so they must be, too, right? (Remember the projection angle!) And ultimately, it will be established that, whatever the patterns in his conduct might have suggested, his hands are clean. No harm, no foul.

But the venal man, the man to whom deceit, peculation, and viciousness come naturally, will react quite differently. He’ll meet suggestions of wrongdoing with a furious backblast. He’ll attempt to silence those who’ve noted the patterns in his conduct; he’ll attempt to thwart those who inquire into whether there’s an objective foundation for them. Should sufficient facts come to light to substantiate an accusation of corruption or low dealing, he’ll go on the attack against his accusers, most especially against their motives. And he’ll never cease to deny his guilt until his semen shows up on a little blue dress.

It was clear to me from early on in the Monica Lewinsky affair that Bill Clinton had done exactly what he was accused of doing. All the tactics enumerated above were immediately deployed. Every attempt was made to discredit Linda Tripp, who had provided the strongest objective evidence for his deeds. Every attempt was made to discourage Tripp and Betty Currie, the receptionist with the most knowledge about Clinton’s visitors and movements in the White House. At all times we heard the “it’s just about sex” backbeat from his supporters, as if they’d have permitted the use of that exculpation by a Republican. And when it became plain that Clinton’s lies could not stand, he mounted the mock defense that he had a right to privacy for the sake of his family.

There are few clearer markers of corruption and deceit than the patterns delineated here.

***
He who contemplates a retributive course of action must answer two questions:

If the answers to these questions are satisfactory, the course is sound. It might even be mandatory. Any objections that could still be raised to it would be on the grounds of effectiveness…or “gentlemanliness.” But it would be morally beyond question.

And so it is with Vengeance for Sarah.

***
UPDATE: Some correspondents, and commenters at other sites, have called the Vengeance for Sarah strategy “character assassination.” Not so. Character assassination is the promulgation of defamatory lies about a man’s character — specifically, affirmative statements that he actually did something illegal or immoral, when in fact no such misdeed has been proved. By contrast, to point out a pattern in Jones’s behavior, and to ask, speculatively, if that pattern is consistent with possible wrongdoing, is a far milder course of action. It deprives Jones of nothing to which he has a right — unless you think that just by existing, a man acquires an enforceable right to the unquestioning good opinion of others.

Since I regard power over others as inherently corrupting, “a fearful servant and a terrible master,” I suspect the motives of anyone who seeks it. I consider it a public service to scrutinize such a person’s behavior and ask the sharpest possible questions about it in the largest available forum. Had a sufficient number of persons done so in the Nineties, it might have headed off Travel-Office-Gate, File-Gate, WhiteWater-Gate, and other infamies. The gentlemen of the “fourth estate” were disinclined to do it, and we neglected to “press” them. More shame to us.

In other words, turn about is fair play, especially in war.