↓ Skip to Main Content
Home › Uncategorized › Bill Gates and China buy the farms – is this a starve America agenda?
Tamquam Posted on June 24, 2021 Posted in Uncategorized No Comments

Bill Gates and China buy the farms – is this a starve America agenda?

Bill Gates is, if not the largest agricultural land holder, then one of the largest.  The Gateway Pundit has the story:

Bill Gates wants the world to take the COVID vaccine maybe multiple times and now he’s buying up farmland across the US. In fact, Bill Gates owns more farmland than anyone else in America today.

Successful Farming reported  that creepy Microsoft Billionaire Bill Gates is now the largest farm landowner in the US:

In 1994, the Gateses hired the former Putnam Investments bond-fund manager to diversify the couple’s portfolio away from the Microsoft co-founder’s 45 percent stake in the technology giant while maintaining comparable or better returns. According to a 2014 profile of Larson in the Wall Street Journal, these investments include a substantial stake in AutoNation, hospitality interests such as the Charles Hotel in Cambridge and the Four Seasons in San Francisco, and “at least 100,000 acres of farmland in California, Illinois, Iowa, Louisiana, and other states … .” According to the Land Report 100 Research Team, that figure is currently more than twice that amount, which means Bill Gates, co-founder of Microsoft, has an alter ego: Farmer Bill, the guy who owns more farmland than anyone else in America.

So what is this guy planning?  We think we now know.

Bill Gates is also a top investor of Memphis Meats — a group of radical animal rights activists working in a lab trying to grow meat from livestock cells.  Their goal is to destroy the livestock industry, and because of that, they have become media darlings.  According to Lonesome Lands blog they have been in many major national publications and last October they made the cover of Inc. Magazine.

According to the Memphis Meats investor page, Bill Gates is one of its top investors. So it appears Bill Gates is partnering with Cargill, and PETA to end livestock production in the US.

And if Bill Gates owns the farmland then he can dictate what will and won’t be produced on American farms.

But Bill Gates isn’t the only one buying up huge swaths of American farmland, wealthy Chinese investors have bought and are buying up big chunks of agricultural land in America as well.  It makes sense that they would do so.  These people are actually agents for the Chinese government, and the Chinese government faces the same problem it has faced for thousands of years: it has more hungry mouths than it can feed.  Historically a bad harvest in China has meant the local communities would expel as many young men and women as necessary to allow the community to survive; over the centuries this has been the primary driver of the Chinese diaspora to all the countries in the region.

To an enormous extent the legitimacy of the Chinese government – the Mandate of Heaven – depends on its ability to feed its population.  The fact is that China cannot feed its own population and is a net food exporter.  By buying up all this farmland in the U.S., historically a net exporter of food, the Chinese Communist Party is safeguarding its Mandate of Heaven.  It helps that they have just won a short, victorious war against the U.S. and don’t intend to lose the advantages that victory obtained for them, both in terms of feeding their own people and using food as a weapon to keep America down.  How aptly Lenin foresaw when he said the Capitalists will sell us the rope to hang them.

Whether the nefarious Chinese or the megalomaniac Gates it all amounts to the same thing in the end, the destruction of America and our subjugation by those that envy and hate us.  I’ll remind you of this tidbit from April, 2021: 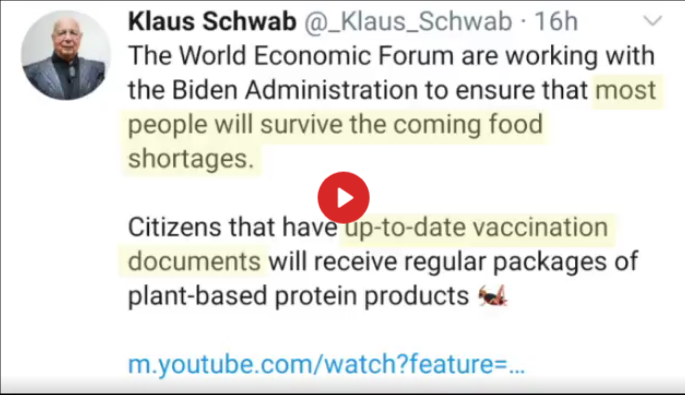